There’s No Arguing That Great Wine Is Made In The Vineyard.

But it helps when you plant and care for the grapes yourself on land you’ve farmed for decades; land that just so happens to be blessed with a soil, geography and climate ideal for growing premium wine grapes.

It helps, too, when your family-owned winery is overseen by a winemaker focused on choosing only select grapes and operated by high-tech equipment more commonly found in much larger wineries.

At Jones of Washington all these factors come together to produce some of the best estate wines in the West. Our wines come from grapes grown in two American Viticultural Areas — Wahluke Slope and Ancient Lakes of Columbia Valley. Although these AVAs are only 25 miles from each other, they are worlds apart viticulturally. The Wahluke Slope is one of the warmest spots in Eastern Washington wine country, while the Ancient Lakes area is considered one of the coolest. Wahluke Slope is known for its intensely flavored red wine grapes likes Syrah, Cabernet Sauvignon and Merlot, while Ancient Lakes’ reputation is built around its white grapes such as Riesling and Pinot Gris.

Attention to detail has led to numerous awards and accolades — including being chosen Washington Winery of the Year in 2012 by Wine Press Northwest Magazine. 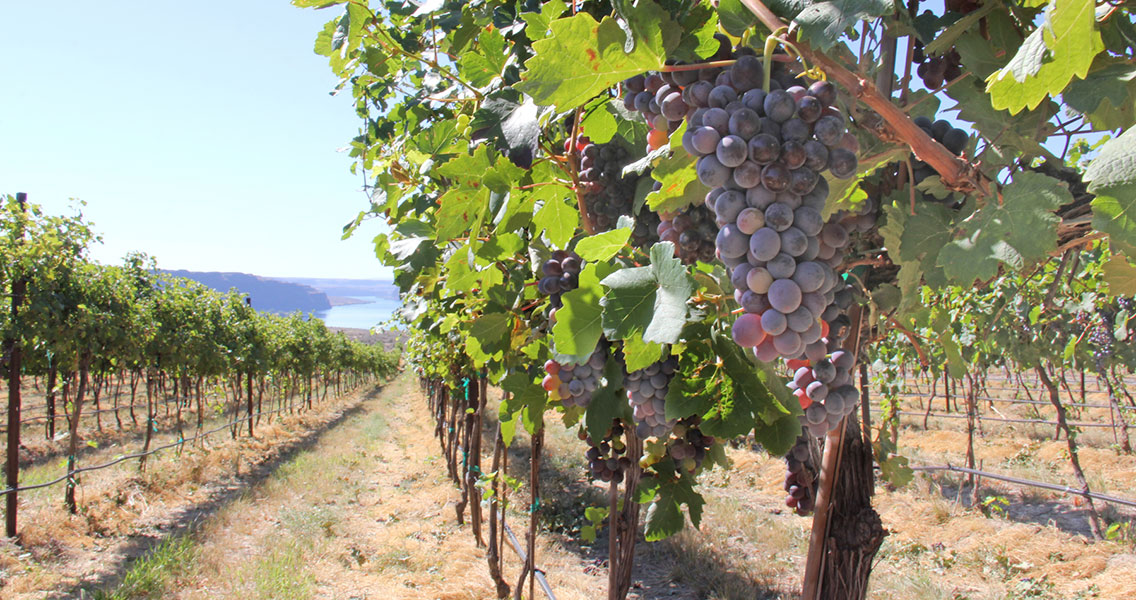 When Ancient Lakes became the state’s 13th AVA in late 2012, the designation served as official notice that this region along the cliffs of the Columbia River in Eastern Washington is one special grape-growing area. One can point to the Ancient Lakes’ unique soils, elevations and cooler climate as the reason behind that distinction.

The soil is full of minerals, and coupled with air flow from the mighty Columbia River, produces grapes with a character found nowhere else. That, in turn, results in wines that are crisper with natural acids than wines made from grapes grown in other areas. Other factors are the elevation levels of the vineyards as well as the northern latitude location of this unique growing area. This makes for a cooler site, which allows the grapes to retain their natural acids.

Jones of Washington is one of just a handful of wineries that harvest grapes from vineyards in Ancient Lakes, a scenic and sprawling 162,762-acre area in Grant, Douglas and Kittitas counties. Jones’ award-winning Riesling, Pinot Gris, Rosé of Syrah, and Sauvignon Blanc all come from grapes grown in this AVA.

As for the name, the Ancient Lakes title comes from a series of small lakes, 35 in all, that were formed by the infamous series of cataclysmic events known as the Missoula Floods. The flood waters stripped away the soil, leaving just scablands behind. Over the ensuing centuries, however, wind deposited sand in the area and soil began accumulating. When water from the Columbia Basin Irrigation Project became reality in the early 1950s, farms quickly popped up and the region became known as one of the most fertile, productive crop growing areas in the nation. Today, it continues to produce large quantities of potatoes, beans, onions, apples, wheat, alfalfa and many other crops.

The climate on the ridges along the Columbia River also varies. Average temperature change between the high and low spots is typically two degrees, which is a big difference during a long growing season. As a result, many grape varieties can be grown in the AVA.

That same spectacular scenery — cliffs jutting straight out of the Columbia, desolate scablands and basalt rock outcroppings above — often evokes comparisons to the Grand Canyon, and provides another attraction for visitors, already drawn by the region’s great wines.

While various grapes can be grown at Ancient Lakes, the area is best known for its white grapes — in particular its Riesling, Chardonnay and Pinot Gris. Indeed, many connoisseurs say no one produces a better, crisper Riesling than the Ancient Lakes area.

Jones of Washington Estate Vineyards in the Ancient Lakes AVA 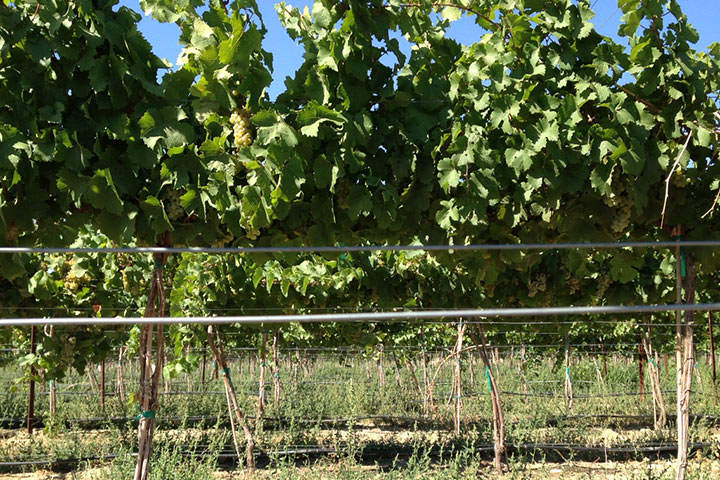 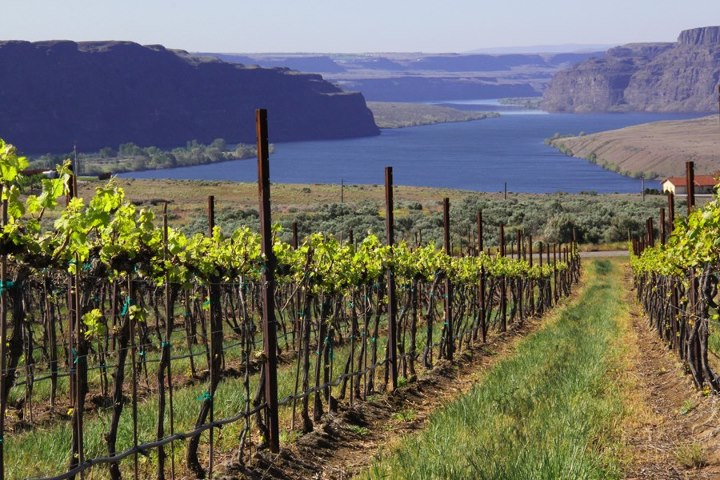 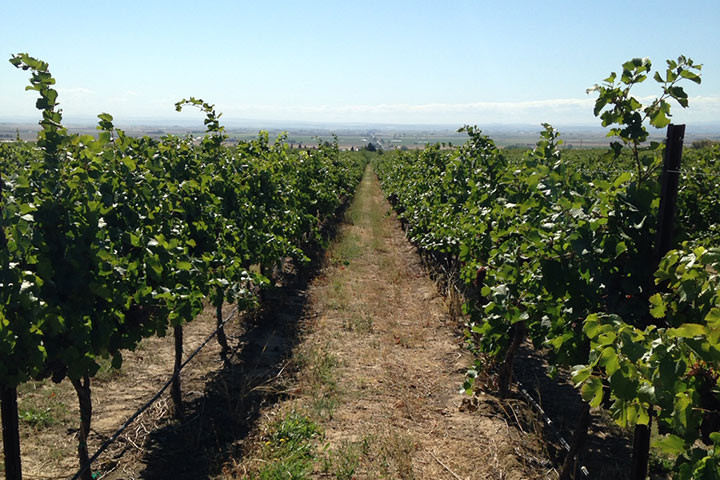 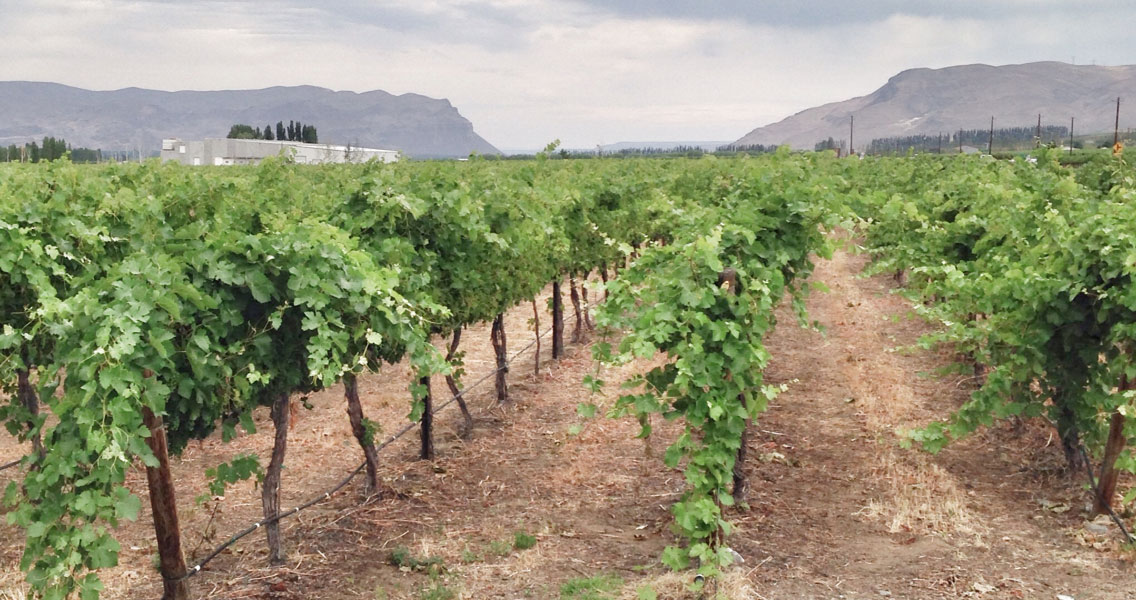 In 1997, the Jones family began planting wine grapes on Wahluke Slope — an area bounded on the west and southern ends by the Columbia River, on the north by the Saddle Mountains and on the east by the Hanford Reach National Monument. The benches along the Columbia River had been home to large orchards since the 1960’s, when water from the Columbia Basin Irrigation Project finally reached the area. It turns out the dusty desert sand, hot summer heat and generally south-facing slopes proved to be just as hospitable to vineyards.

Wahluke (pronounced WAH-luke) is a Native American name for ‘watering place.’ The area has two different soil types that lend themselves to several grape varieties. The Ice Age floods of more than 12,000 years ago had deposited sandy loam on lower elevations and silky loam and calcium-rich soil on higher shelves. The high temperatures and low precipitation also allows growers to control vine vigor and ripening through small, carefully timed watering from drip systems.

It wasn’t long after the first vineyards were planted that grapes from the Wahluke Slope became known as some of the best in the state. In 2006, the area became the state’s 8th recognized American Viticultural Area. It is one of the warmest growing regions in the state along with being one of the more coveted areas as the dry, warm climate is ideal for growing wine grapes.

Today, grapes from the vineyards, about 30 percent of the state’s wine grape acreage, go to many of the state’s big and small wineries. Although the first plantings in the region began with white varietals such as Riesling, Chardonnay and Chenin Blanc, red wine grapes now make up 80 percent of total acreage, dominated by Cabernet Sauvignon, Merlot and Syrah.

Jones of Washington Estate Vineyards in the Wahluke Slope AVA 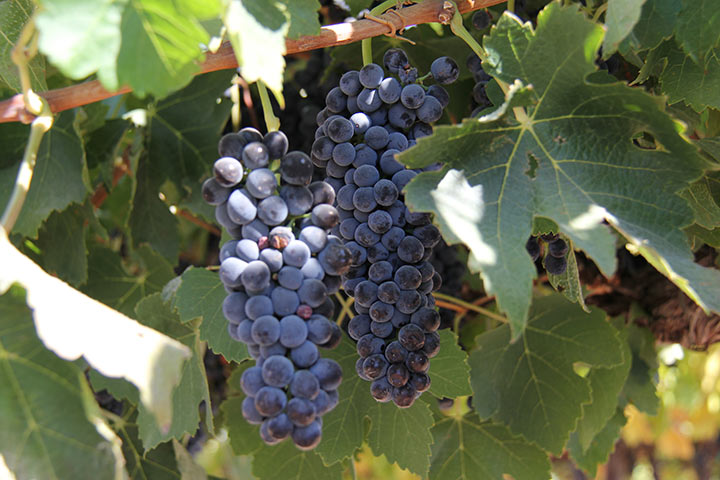 UNIT 7 VINEYARD
Summary: This vineyard is located on a south-facing slope just outside of the town of Mattawa on the Wahluke Slope
Varietals:Cabernet Sauvignon, Chardonnay and Merlot
Planted: 1997
Elevation: 850 to 900 feet
Soil: Sandy loam soil, 18 inches to 24 inches deep, over a gravelly caliche layer
Vine crop management:Vines are planted 6-feet apart, with 8-foot rows; training system is a bilateral cordon with vertical shoot positioning system; Jones of Washington acreage is thinned to 3 to 4 tons per acre to help the vines create grapes with ripe flavors 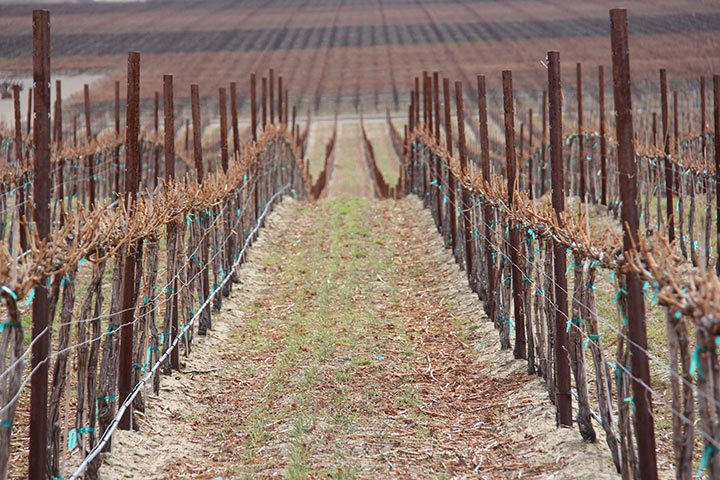 UNIT 9 VINEYARD
Summary: This vineyard is located on a south-facing slope just outside of the town of Mattawa on the Wahluke Slope
Varietals: Cabernet Franc,Cabernet Sauvignon, Chardonnay,Merlot, Sangiovese, Syrah and Zinfandel
Planted: 1997
Elevation: 800 to 850 feet
Soil: Loamy Sand soil, 18 inches to 24 inches deep, over a gravelly caliche layer
Vine crop management:Vines are planted 6-feet apart, with 8-foot rows; training system is a bilateral cordon with vertical shoot positioning system; Jones of Washington acreage is thinned to 3 to 4 tons per acre to help the vines create grapes with ripe flavors 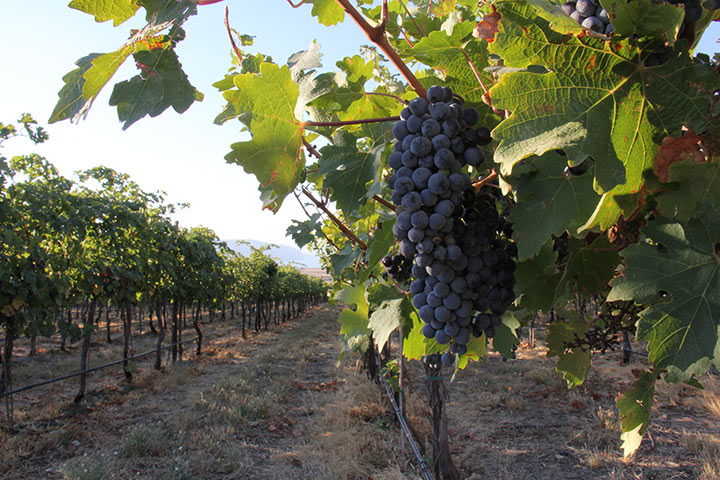 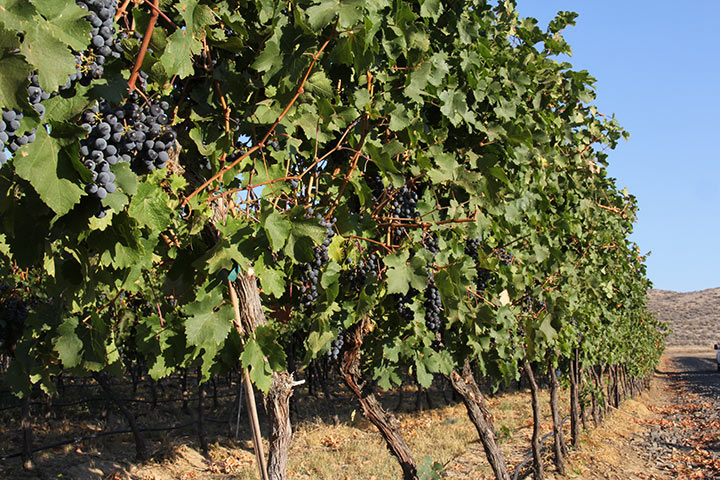 UNIT 11A VINEYARD
Summary:This vineyard is located on a south-facing slope 5 miles east of the town of Mattawa on the Wahluke Slope
Varietals:Cabernet Sauvignon, Merlot and Riesling
Planted:First plantings in 1998, more in 2005
Soil:Some areas of loam but mostly sandy loam soil, 18 inches to 36 inches deep, over a gravelly caliche layer
Vine crop management:Vines are planted 6-feet apart, with 8-foot rows; training system is a bilateral cordon with vertical shoot positioning system 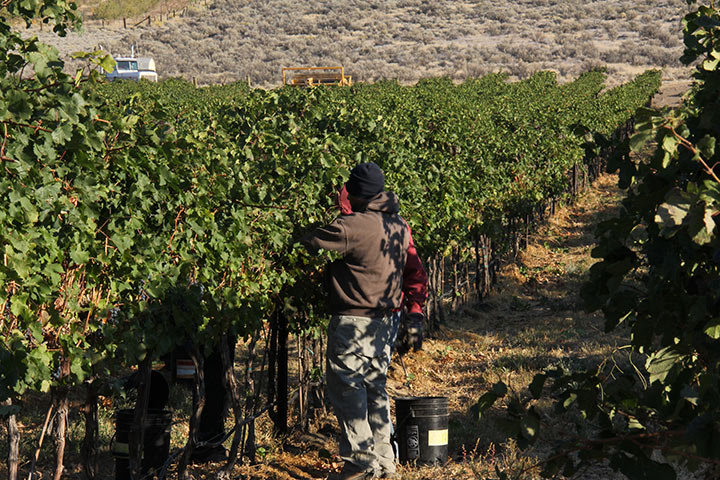 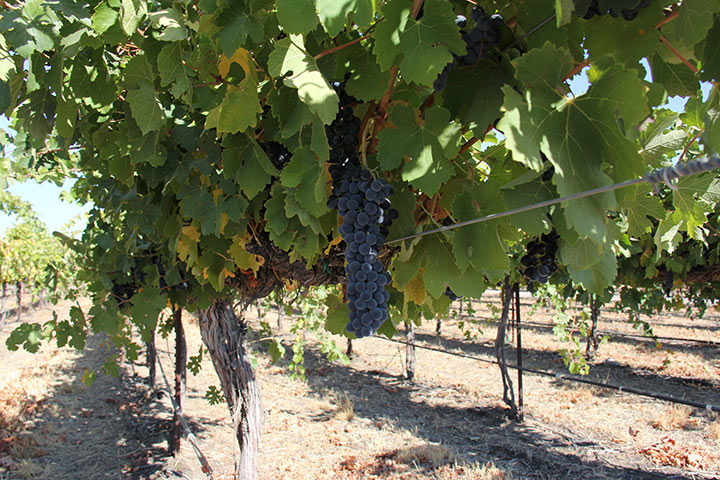 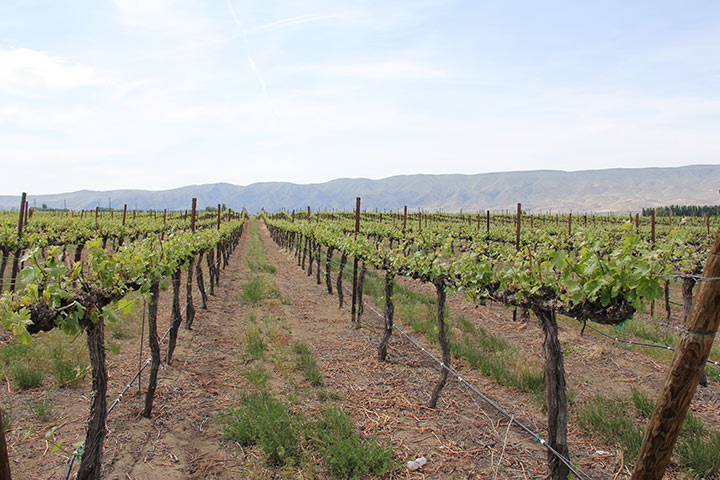 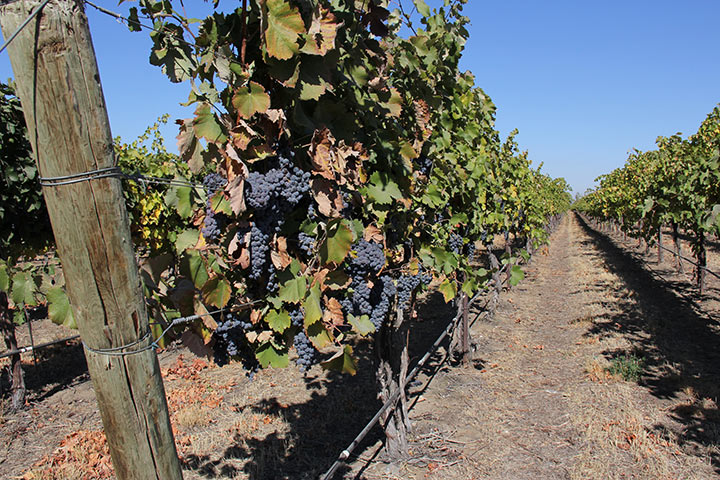 UNIT 37 VINEYARD – ‘Broken Pick’
Summary: This vineyard is located on a west-facing slope about one mile southwest of the town of Mattawa on the Wahluke Slope
Varietals: Cabernet Sauvignon, Merlot and Syrah
Planted: 1998
Soil: The soil in this vineyard is Jones of Washington’s most well drained soil; the soil is mainly a coarse loamy sand with areas of blow sand; soil ranges from 12 inches to 24 inches deep
Vine crop management: Vines are planted 6-feet apart, with 8-foot rows; training system is a bilateral cordon with vertical shoot positioning system 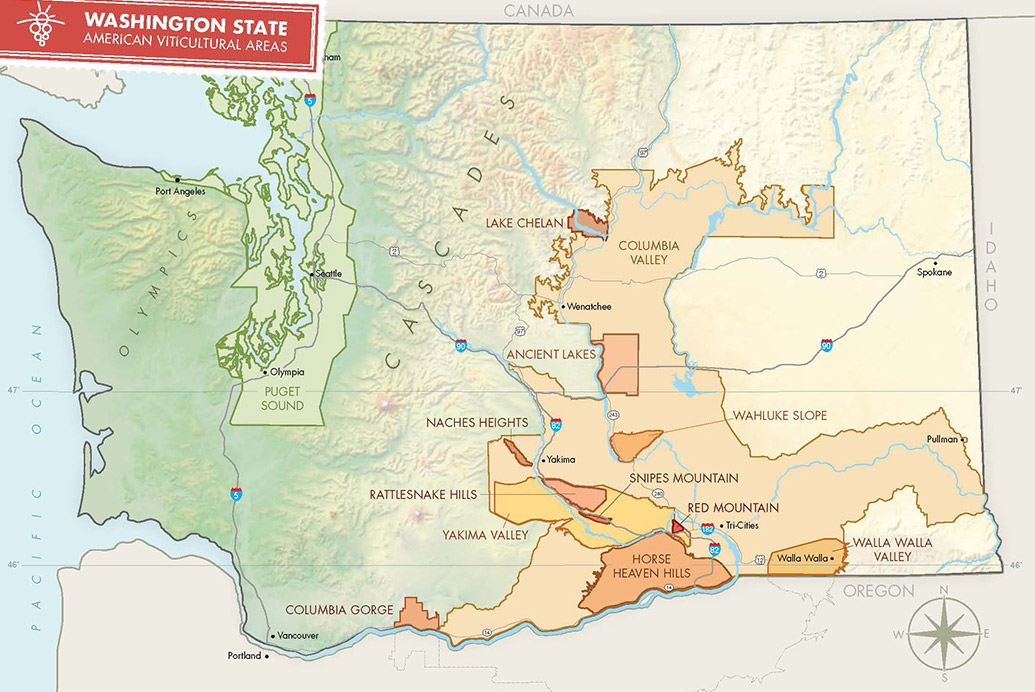